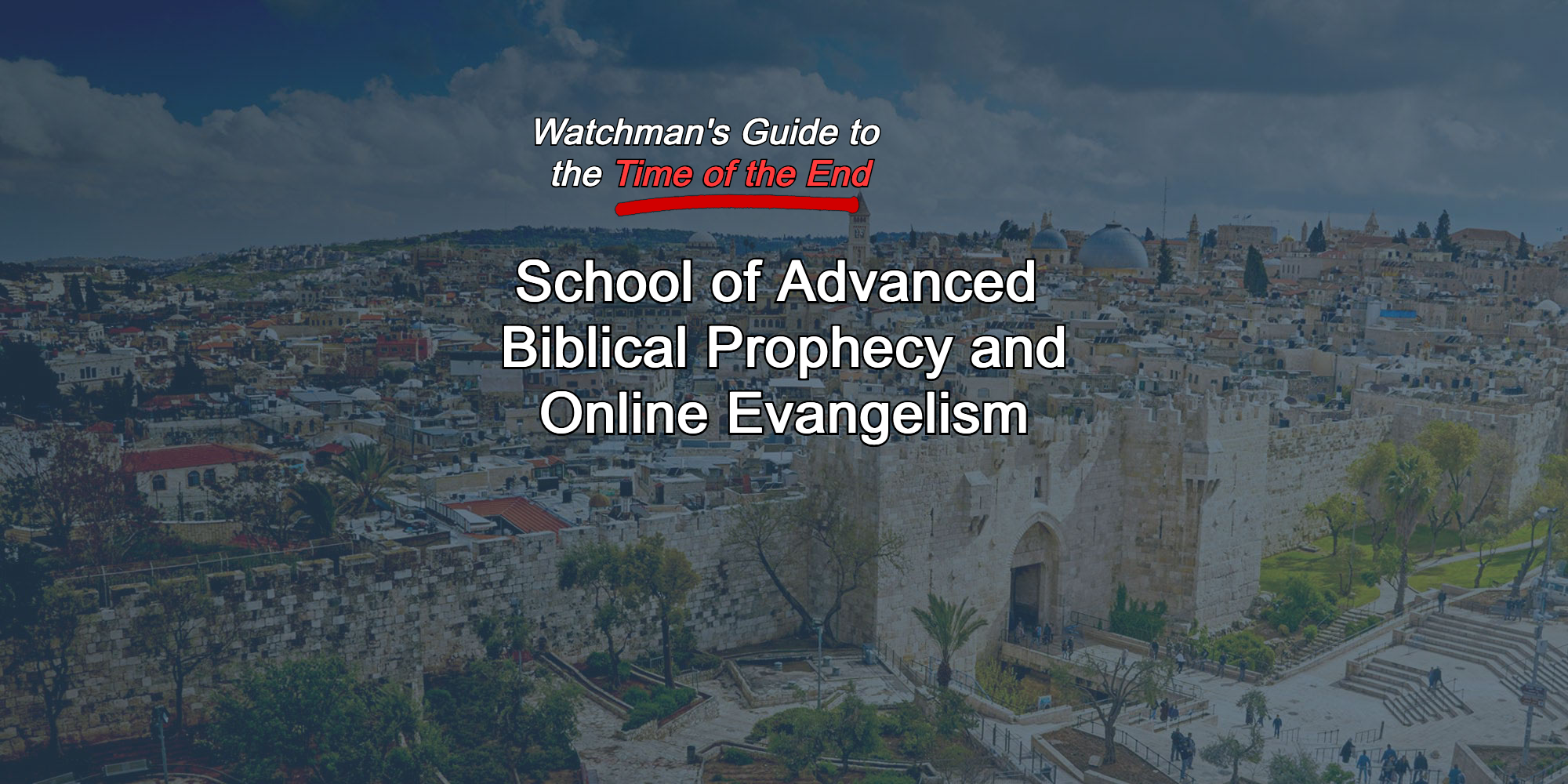 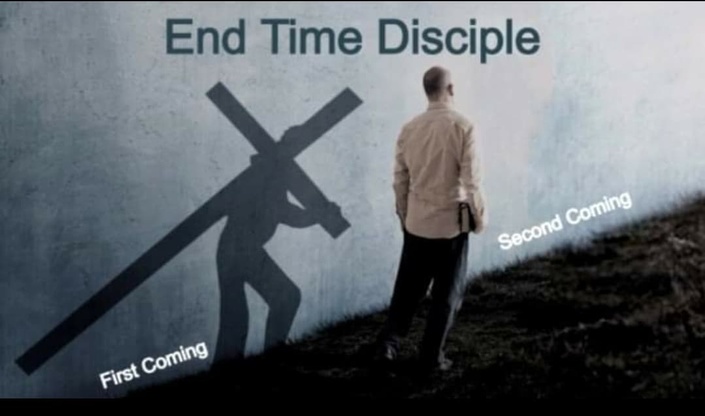 Overview of The Time of the End

About the End Time Watchman vision

From my understanding of the scriptures, after God wakes His people, many will be desperate for answers. We will have a short time period to pick up the pieces that are left and help others. As mentioned in the video below, Daniel says that at the Time of the End those who are wise will instruct many. There are only a couple options at this point for believers. Search the scriptures and follow God with childlike faith, or go the opposite direction.

The good news is the End Time Watchmen are here. God gives the world a chance to repent by sending a vigilant watchman in the Time of the End. We have developed an online school to share our knowledge and educate people about the message God said would be closed and sealed until the Time of the End. 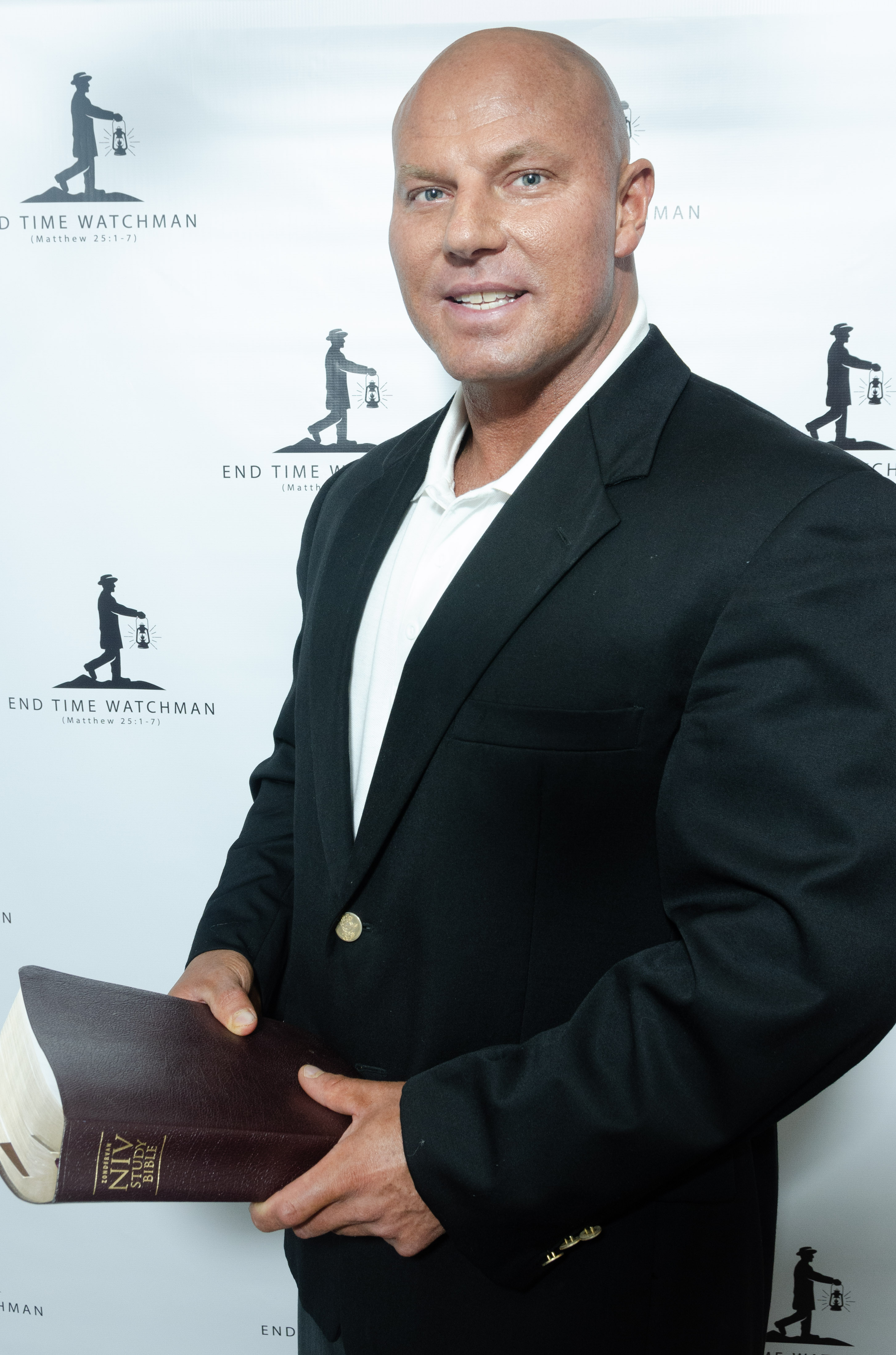 Justin Mitchell grew up in Franklin, Indiana, about 25 miles south of Indianapolis. Family has always been important to him. Justin’s mother is the person who got his brother and him to attend church every Sunday. At 11 years of age, Justin accepted Christ as his Savior at the Independent Fundamental Baptist church. Even while attending public high school, Justin began to feel called to the ministry.

We are all shaped in some way by our environment and circumstances, and Justin is no different. Despite family challenges and his parents’ eventual divorce, looking back he sees that these and other events allowed him to see what was most important in his life and to have the vision for End Time Watchman.

After high school, Justin attended Pensacola Christian College in Florida. He received his Bible degree in 2004 with a Pastoral Ministries major and a Biblical Language minor.

It was during college that Justin faced a turning point in his beliefs. Just after 9/11 he spent a lot of time reading and studying the Bible. Justin began to question an important tenet of his church, which taught a “pre-tribulation rapture”. This means Christ will come and gather up the church before the last 7 years of the world. However, there are other churches that believe in “post-tribulation rapture” and as Justin read the Bible concerning this prophecy, he began to feel the Holy Spirit talking to him. After reading and rereading multiple verses he began to believe that Christ will return immediately after the tribulation and those who are dead will be resurrected first. Then those living believers will be raptured with Christ and will be with Him forever.

If you are trying to contact us feel free to send an email to:

For almost two thousand years Christians have been trying to understand about the “Time of the End” and when Jesus Christ would return to gather His people and establish the Kingdom of God on Earth. For even longer the Jewish people have been waiting for the Messiah to appear and restore the Kingdom to Israel as God promised. 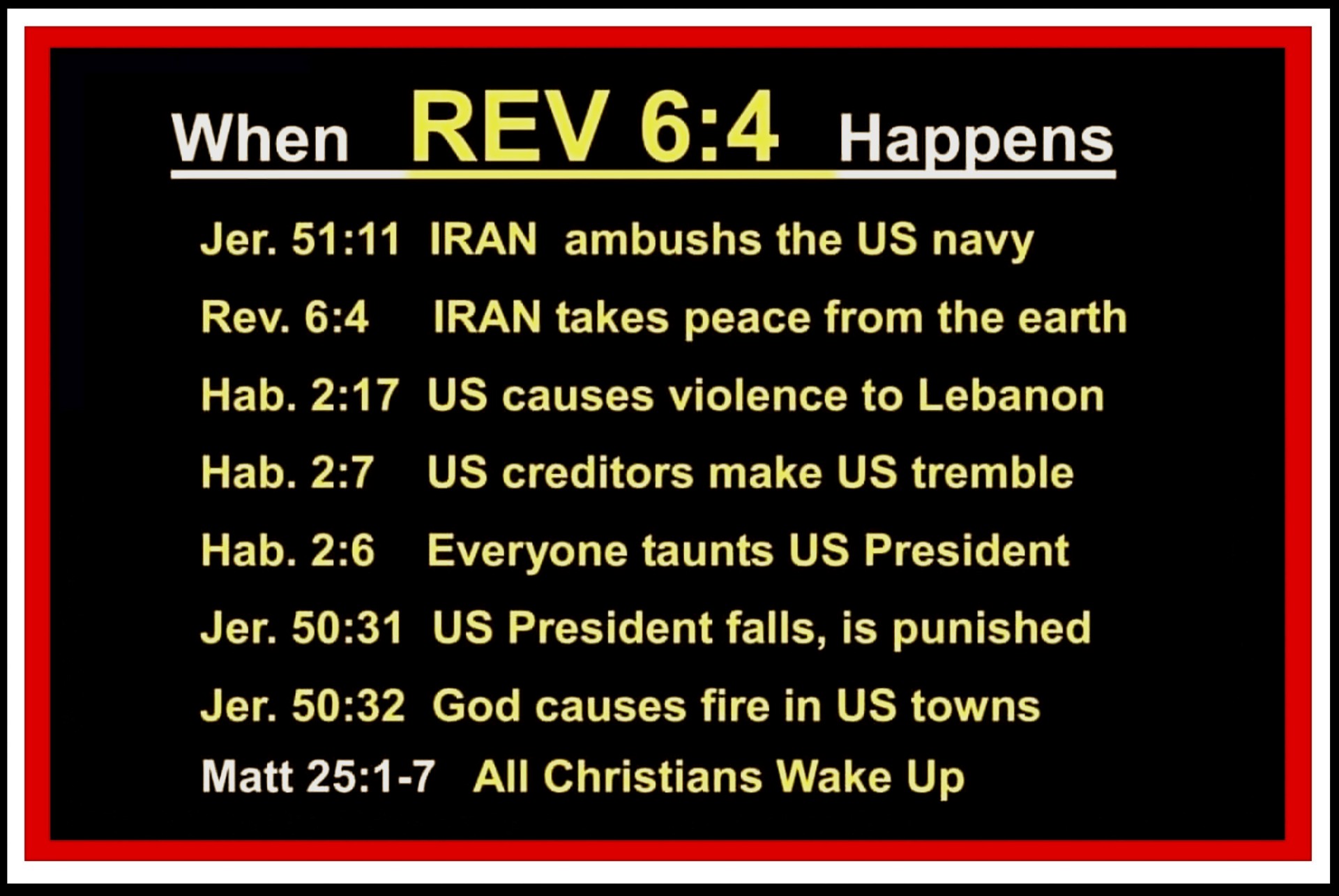 Then another horse came out, a fiery red one. Its rider was given power to take peace from the earth and to make men kill each other. To him was given a great battle.

Rapture at the Last Trumpet

Listen, I tell you a mystery: We will not all sleep, but we will all be changed in a flash, in the twinkling of an eye, at the last trumpet. For the trumpet will sound, the dead will be raised imperishable, and we will be changed.

Use this block to showcase testimonials, features, categories, or more. Each column has its own individual text field. You can also leave the text blank to have it display nothing and just showcase an image.

Yehovah spoke to the Watchman

Son of man, listen carefully and take to heart all the words I speak to you. Go now to my people and speak to them. Say to them, ‘This is what the Sovereign Yehovah says,’ whether they listen or fail to listen.

Use this block to showcase testimonials, features, categories, or more. Each column has its own individual text field. You can also leave the text blank to have it display nothing and just showcase an image.

This is my name forever, the name you shall call me from generation to generation. 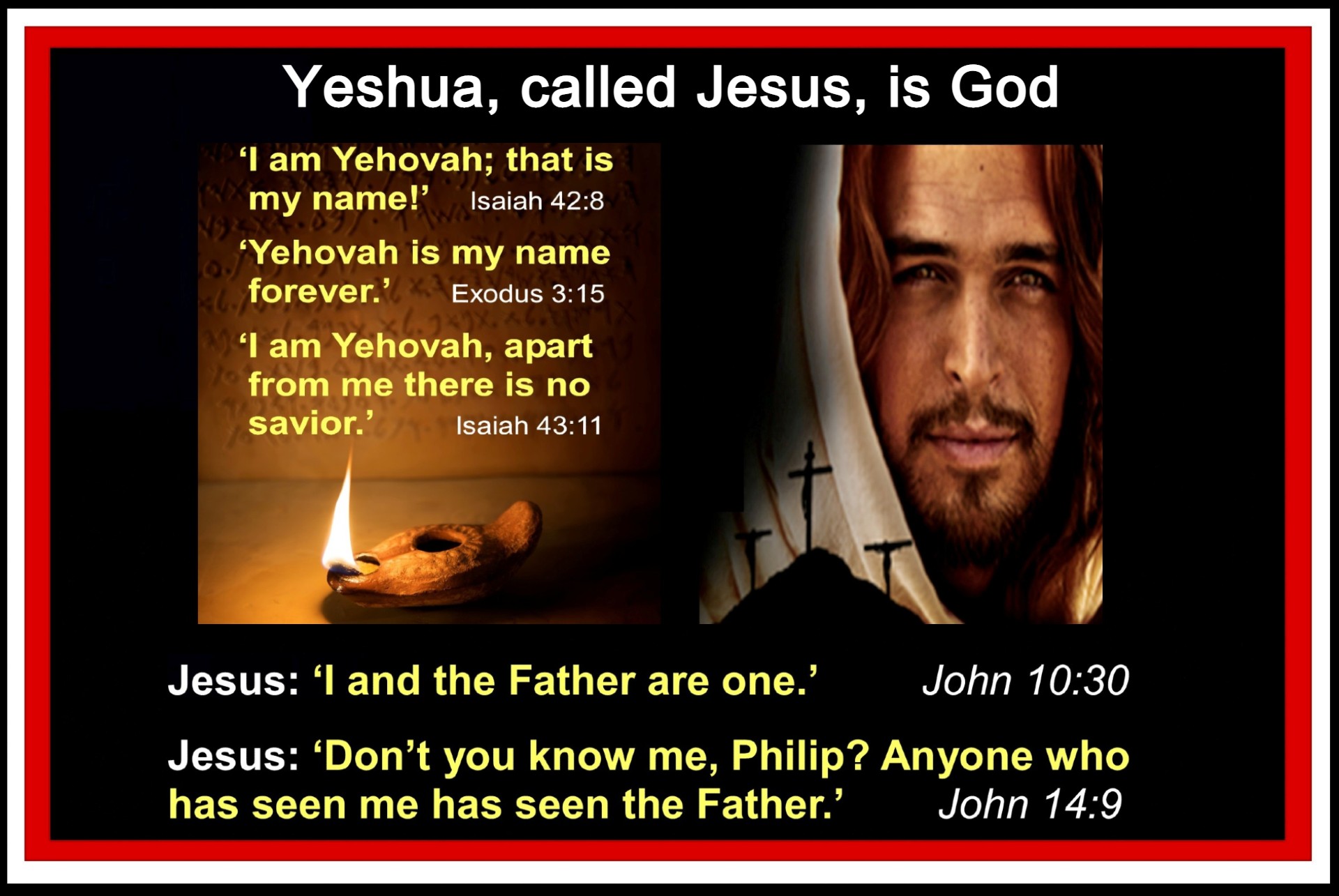 Yeshua: Anyone who has seen me has seen Yehovah. 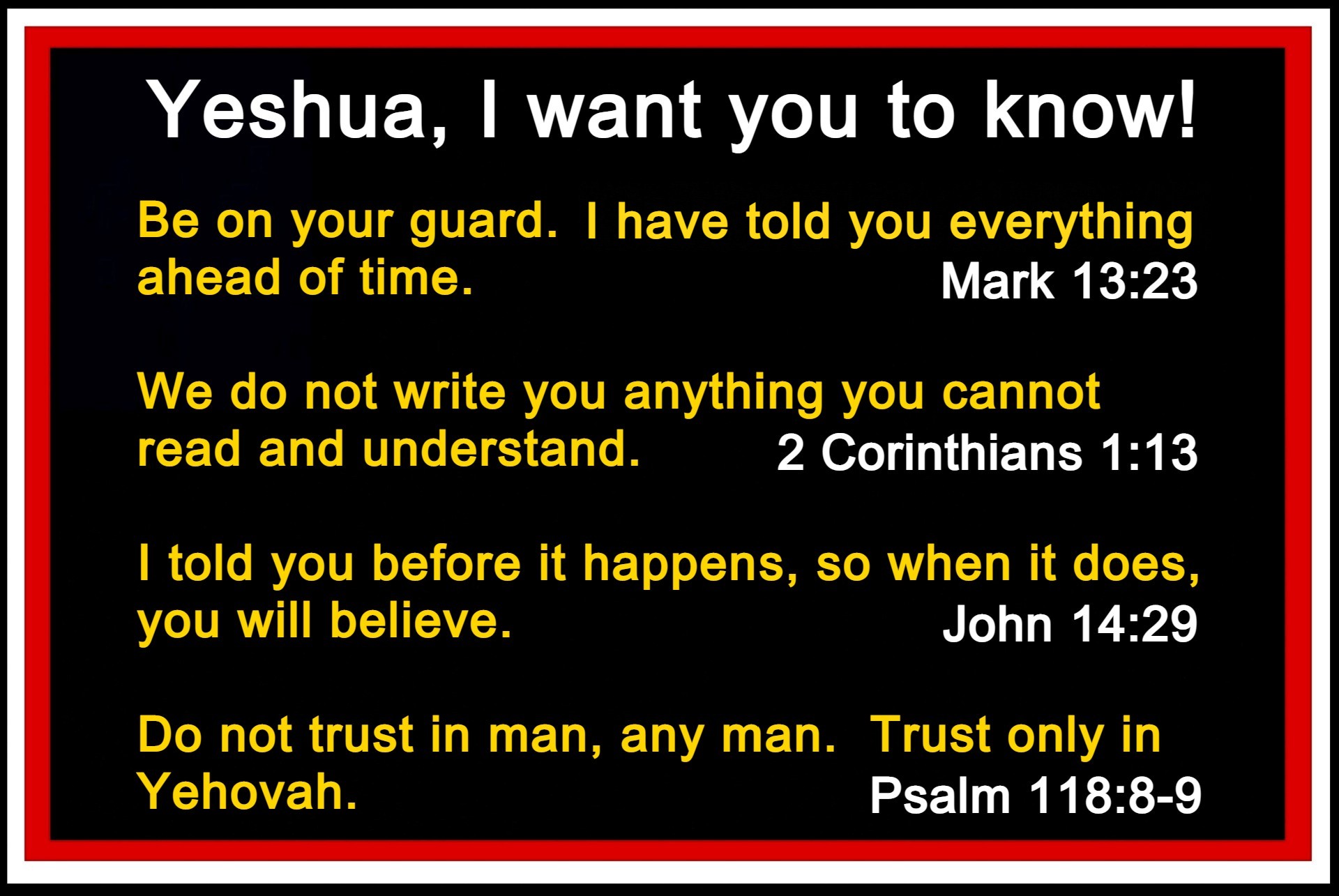 I told you everything

Be on your guard. I told you everything ahead of time.

Christ was a long time in coming, and all Christians became drowsy and fell asleep.

Then all Christians woke up. 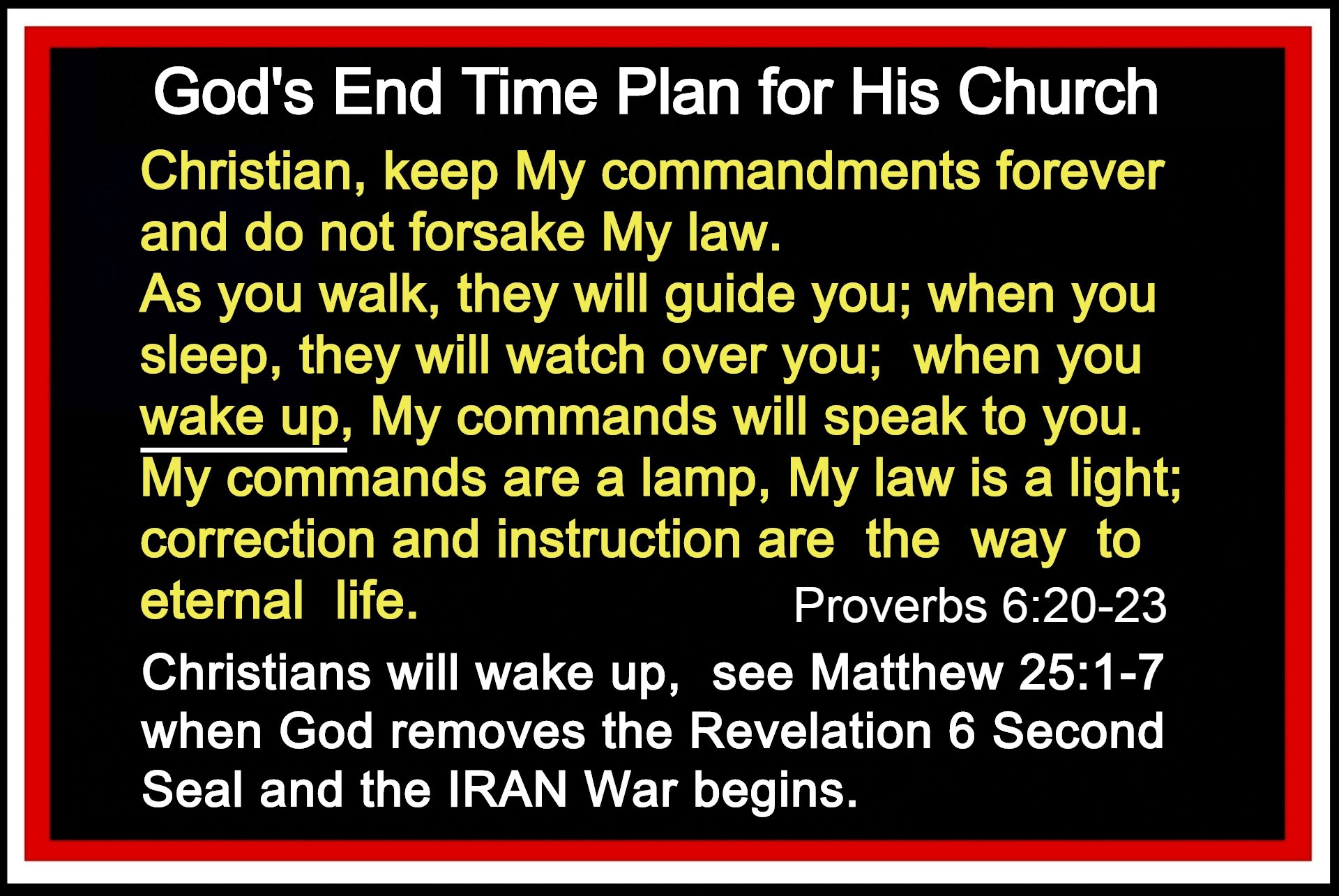 What Christians Must Do

My son, keep your father’s commands and do not forsake the law. 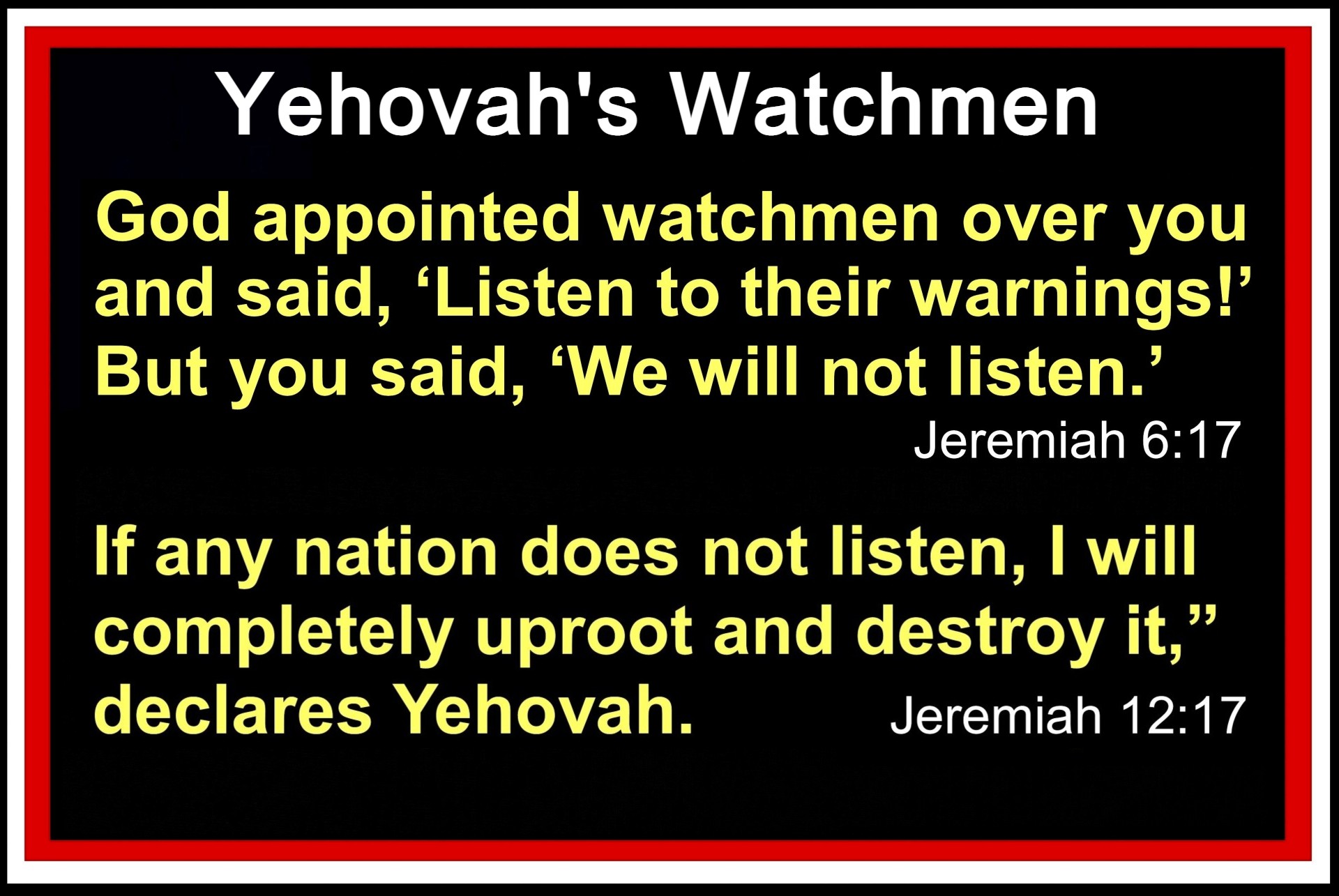 Unless Yehovah watches over the city, the Watchmen stand watch in vain. 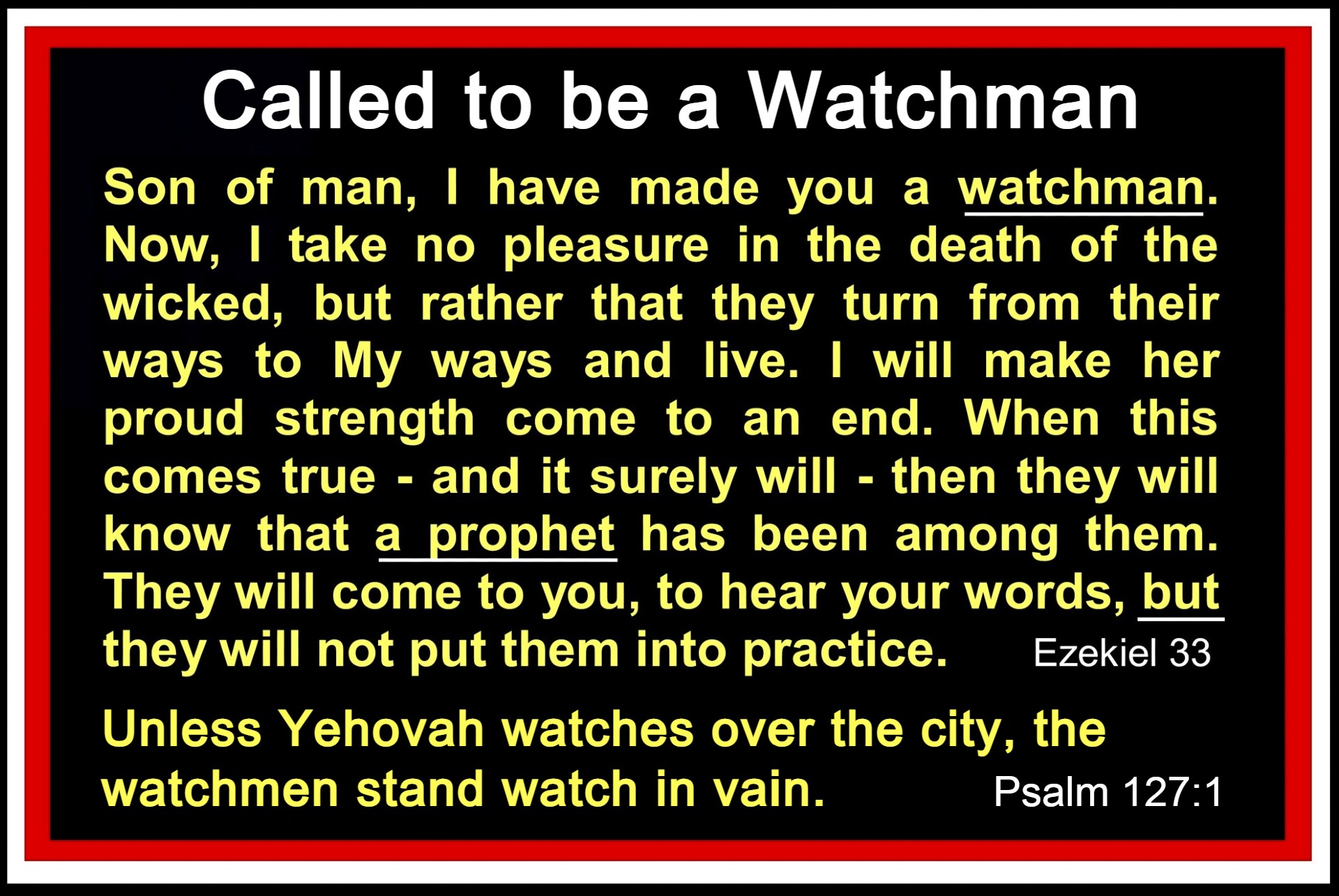 Son of man. I have made you a watchman. 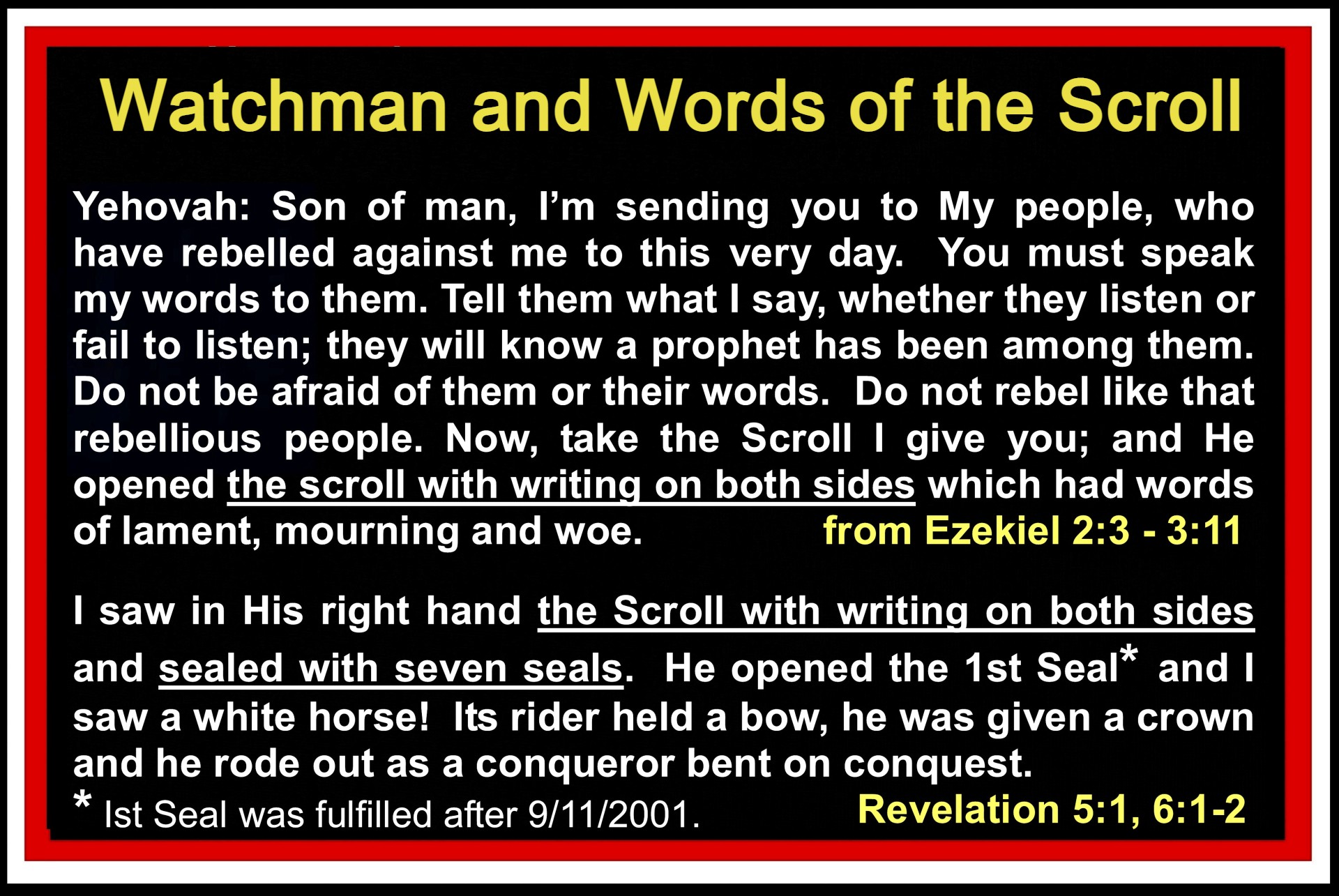 Words of the Scroll

He gave me the scroll ... Son of man, go to my people and speak my words to them.